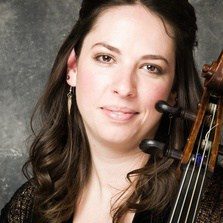 Multi-instrumentalist Adaiha MacAdam-Somer is highly sought after as a teacher, chamber, and orchestral musician across the United States and Europe. She splits her time and passion equally between cello, baroque cello, and all branches of the viola da gamba family. From her home base in Portland, Adaiha performs with a variety of ensembles including Amadeus Chamber Orchestra, Portland Baroque Orchestra, Seattle Baroque Orchestra, Voices of Music, Philharmonia Baroque Orchestra, and Voice of the Viol, which she is Artistic Director of. She will be making her chamber music debut with 45th Parallel in the 2021-2022 Season. As an educator she is Adjunct Professor of Cello at Linfield University, maintains a studio of private students, coaches the Bridgetown Baroque Ensemble, Trillium Baroque Orchestra, and substitute teaches for youth orchestras and chamber ensembles across the Pacific Northwest. Adaiha is regularly sought after as a guest instructor of workshops nationwide.

Miss MacAdam-Somer holds a Masters in Chamber Music and a Professional Studies Diploma in Cello Performance from the San Francisco Conservatory of Music. While in attendance, she had the opportunity to work and perform with such esteemed artists as Kim Kashkashian, Robert Mann, Menahem Pressler, Ian Swenson, and Joseph Swensen. While completing her undergraduate degree in cello performance at the University of Wisconsin-Madison, Adaiha taught for the Wisconsin Youth Symphony Orchestra and was tenured into Madison Symphony Orchestra as their assistant principal cellist. Her primary teachers include Jean-Michel Fonteneau, Elisabeth Reed, Uri Vardi, and Laszlo Varga. In the summer you can find her performing with various festivals and teaching chamber music and cello at Kinhaven Music School. Adaiha is forever grateful to Indre Viskontas and Adam Bristol for facilitating the acquisition of her bass viol, made by master luthier Francis Beaulieu.