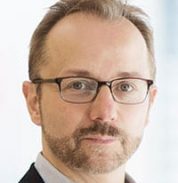 Christopher Stowell, the son of Kent Stowell and Francia Russell, was born in New York City, and received his training at Pacific Northwest Ballet School and the School of American Ballet. In 1985, he joined San Francisco Ballet where he danced for 16 years, appearing in theatres throughout the world including the Paris Opéra Ballet, New York’s Lincoln Center, Kennedy Center in Washington D.C., and Moscow’s Bolshoi Theatre. As a Principal Dancer, Christopher performed leading roles in the full-length classics ROMEO AND JULIET, THE SLEEPING BEAUTY, LA FILLE MAL GARDEE, and OTHELLO, and had roles created for him by Artistic Director Helgi Tomasson, as well as contemporary choreographers including Mark Morris, William Forsythe, and James Kudelka. An established interpreter of the George Balanchine repertoire, Christopher appeared in almost every Balanchine ballet performed by San Francisco Ballet.

In 2003, Christopher was named the Artistic Director of Oregon Ballet Theatre (OBT), a position he held until 2012. During his tenure, Christopher made significant additions to OBT’s repertoire, bringing to Portland works from some of the world’s most celebrated choreographers, including Fredrick Ashton, George Balanchine, Jerome Robbins, William Forsythe, Paul Taylor, Helgi Tomasson, James Kudelka, Christopher Wheeldon, and Lar Lubovitch.

Christopher has taught and coached in San Francisco, New York, Japan, China, and across Europe. He has created works for San Francisco Ballet, Pennsylvania Ballet, Diablo Ballet, and Pacific Northwest Ballet, as well as the New York City Ballet Choreographic Institute. He has also staged the works of George Balanchine, Mark Morris, and Christopher Wheeldon. In addition to serving as Ballet Master and Assistant to the Artistic Director at San Francisco Ballet for the 2014/15 season, he recently worked in Amsterdam, Antwerp, Beijing, and Copenhagen, and created his first work for Los Angeles Ballet, and his first film for the San Francisco Dance Film Festival. In 2017, Christopher joined The National Ballet of Canada as Associate Artistic Director. In this role, he oversees the artistic staff, teaches, coaches, and stages works for the company, and works closely with Karen Kain in realizing her vision for the National Ballet. Christopher is a member of the creative team for Karen Kain’s new production of SWAN LAKE which will premiere in June 2022.