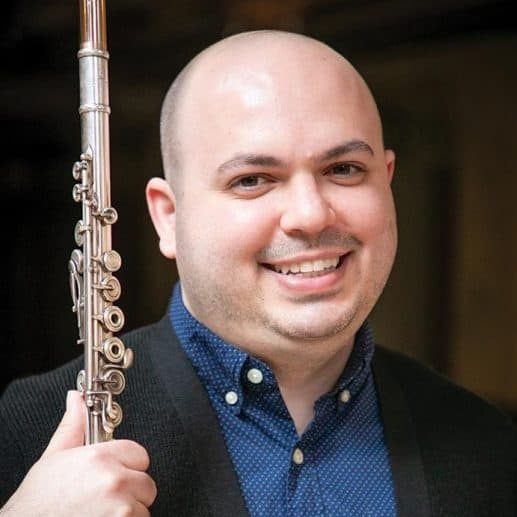 Zachariah Galatis’ “irresistible energy, appealing tone, and dazzling technique” (The Oregonian) have cemented his place in Portland’s music community. Serving as solo piccolo of the Oregon Symphony since 2012, you can also hear Zach playing with various other groups around town, including frequent appearances with 45th Parallel.

In addition to performing, Zach is a passionate educator, having given various masterclasses and seminars on piccolo technique, including at both of his alma maters. He maintains a private studio in Portland, working with students of all ages, and since 2016, Zach has been the Instructor of Flute at the University of Portland.

Zach has appeared as guest piccolo with orchestras around the country, including Baltimore, Detroit, and Seattle, and has appeared as guest principal flute with the Buffalo Philharmonic multiple times, including for their 2018 tour to Poland. He has also performed at various summer festivals, including the Astoria Music Festival and Oregon Bach Festival. Before Joining the Oregon Symphony, Zach played piccolo/third flute in the Virginia Symphony Orchestra, under music director JoAnn Falletta.