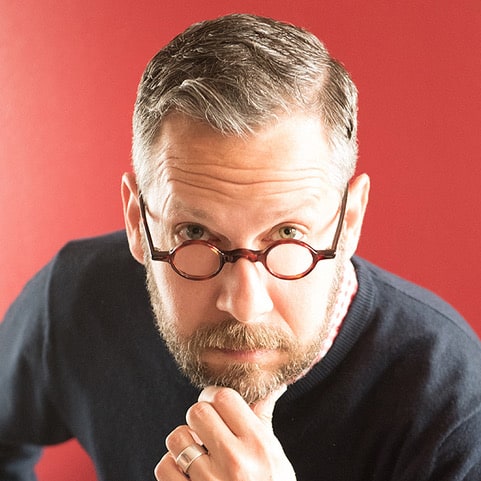 Known both for his bold and inventive productions and for his acute musical instincts, Chas Rader-Shieber has established himself as one of the most innovative opera directors of his generation. Reviewing his staging of Janáček’s THE CUNNING LITTLE VIXEN, Toronto’s Classical 96.3 FM praised Mr. Rader-Shieber’s “daring and visionary approach to staging” and declared him “a force to be reckoned with in the opera world.” Mr. Rader-Shieber’s repertoire encompasses a broad range of works from Monteverdi to Benjamin Britten, but he has made a particular specialty of Baroque opera.

In the 2021-2022 season, Mr. Rader-Shieber continues his close collaboration as Resident Stage Director with the Curtis Institute of Music, workshopping a new piece, 24, and directing a new production of DANGEROUS LIAISONS. He also returns to Des Moines Metro Opera for a new production of Britten’s A MIDSUMMER NIGHT’S DREAM. Future seasons will include a new production with Opera Colorado.

Chas Rader-Shieber’s engagements during the COVID-19 impacted 2020-2021 season included co-directing a film, MERCY, with Alek Shrader, based on Mozart’s La clemenza di Tito and created for Curtis Institute of Music. He also directed a new production of Rameau’s PLATÉE at Des Moines Metro Opera, and a reprisal of his acclaimed production of ORFEO ED EURIDICE at The Dallas Opera was unfortunately canceled.

Mr. Rader-Shieber’s original engagements during the COVID-19 shortened 2019-2020 season included directing a production of SHINING BROW at Arizona Opera (completed), Vivaldi’s BAJAZET at Portland Opera (cancelled) and a return to Curtis Institute of Music to direct their productions of IL BARBIERE DI SIVIGLIA (completed) and LA CLEMENZA DI TITO (postponed). During the summer of 2020, he planned a return to Des Moines Metro Opera for their production of PLATÉE by Rameau (postponed).

Mr. Rader-Shieber’s 2016-2017 season included a debut with Pittsburgh Opera for LA TRAVIATA and a return to Des Moines Metro Opera for Gluck’s ORFEO. Previously, he continued his association with the Curtis Insitute of Music, directing CAPRICCIO. On the international stage, Mr. Rader-Shieber directed FAUST with the Macau Festival, and made a return to Pinchgut Opera in Australia for their production of L’AMANT JALOUX.

During the 2013-2014 season, he returned to Sydney, Australia with Pinchgut Opera for GIASONE (Cavalli), and revived his acclaimed production of Orlando for HOBART BAROQUE, which was nominated for a Helpmann Award for Direction of an Opera in Australia. He also debuted with Utah Opera for DIE ENTFÜHRUNG AUS DEM SERAIL, and joined Wolf Trap Opera for GIULIO CESARE.

Mr. Rader-Shieber began the 2012-2013 season with DIE ZAUBERFLÖTE at the Curtis Institute of Music, where he has directed over 26 operas. Other notable recent productions with Curtis include: Henze’s ELEGY FOR YOUNG LOVERS, and Idomeneo and Rossini’s IL VIAGGIO A REIMS. The 2012-2013 season also found Mr. Rader-Shieber debuting with Portland Opera directing Handel’s RINALDO.

Of his production of Handel’s ORLANDO at the New York City Opera in 2004, The New York Times stated that Rader-Shieber had given audiences a production “at once contemporary, fanciful and true to the original.” In addition to ORLANDO, Mr. Rader-Shieber’s work at the New York City Operahas included a critically acclaimed production of Handel’s FLAVIO in 2003. The 2011-12 season included a debut with the Staatstheater Darmstadt for Léhar’s DIE LUSTIGE WITWE. In the 2010-2011 season, Mr. Rader-Shieber’s engagements included LA CLEMENZA DI TITO for Vancouver Opera, as well as DON GIOVANNI with Music Academy of the West.

Mr. Rader-Shieber opened the 2009–2010 season directing his production of DIE ENTFÜHRUNG AUS DEM SERAIL with San Francsico Opera and followed by a revival of his TAMERLANO for Los Angeles Opera. He concluded the season directing ANTONY AND CLEOPATRA for the Curtis Institute of Music and Handel’s TOLOMEO for Glimmerglass Opera.

In the 2008–2009 season, Mr. Rader-Shieber made his debut in Australia presenting Charpentier’s DAVID ET JONATHAS for Pinchgut Opera. He presented a new production DIE ENTFÜHRUNG AUS DEM SERAIL at Lyric Opera of Chicago, and directed IL VIAGGIO A REIMS at Curtis. He finished the season with a new production of IL RE PASTORE for Opera Theatre of St. Louis and directed his production of DON GIOVANNI for Santa Fe Opera.

During the 2007–2008 season, Mr. Rader-Shieber directed UNA COSA RARA for Opera Theatre of Saint Louis, Handel’s TAMERLANO at Washington National Opera, Bolcom’s A WEDDING for Music Academy of the West, as well as direction and production of AINDAMAR by Osvaldo Golijov with Curtis Opera Theater.

In 2006-2007, Mr. Rader-Shieber brought his DON GIOVANNI to Opera Pacific and also made his return to New York City Opera directing Rossini’s LA DONNA DEL LAGO, which he also directed at Minnesota Opera. Rounding out his season were engagements to direct L’ORMINDO at Pittsburgh Opera, THE CUNNING LITTLE VIXEN at Houston Grand Opera, and Bellini’s I PURITANI at Opera Theater of St. Louis.

Mr. Rader-Shieber has also become well known for his interpretations of Mozart operas. Among others, he has directed DIE ZAUBERFLÖTE, DON GIOVANNI and COSI FAN TUTTE at companies including Opera Pacific, Opera de Montreal, Santa Fe Opera, and the Juilliard Opera Center. The Toronto Globe and Mail said of his LA CLEMENZA DI TITO: “Rader-Shieber is a talent to watch, given his brilliant, economical illumination of Metastasio’s text, which focused on character revelation like a psychological thriller.”

Mr. Rader-Shieber’s work also includes repertoire ranging from Tchaikovsky’s EUGENE ONEGIN at the Skylight Opera Theatre, to Donizetti’s DON PASQUALE at Music Academy of the West, and the operas of Britten, Giancarlo Menotti, and Ned Rorem at the Curtis Institute of Music. Mr. Rader-Shieber has served as Artistic Director of the Skylight Opera Theatre, and on the faculty of The Juilliard School and the Music Academy of the West.