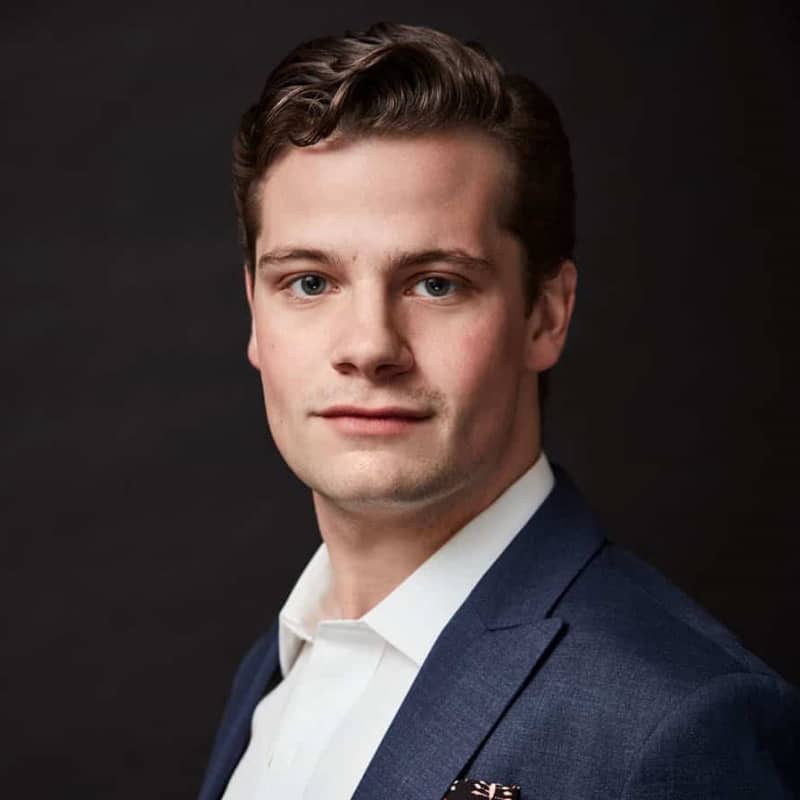 Baritone Conor McDonald has been lauded by the New York Times as “irresistible” and praised by Opera News for his “warm voice and winning personality.”

Engagements for the 2021-2022 season include the cover of the Major-Domo in ARIADNE AUF NAXOS with The Metropolitan Opera and Dancaïre in CARMEN in his Minnesota Opera debut.

Based in New York, McDonald has performed as Junius in THE RAPE OF LUCRETIA as a guest artist with CUNY Queens, the Traveler in CURLEW RIVER with the Mark Morris Dance Group at Brooklyn Academy of Music; and several appearances as baritone soloist with New York City Ballet, including Bernstein’s DYBBUK, Stravinsky’s LES NOCES, and Brahms’s LIEBESLIEDER WALZER.

Performances for the 2019-2020 season included his debut with Austin Opera as Marullo in RIGOLETTO, a master class and recital at Lee University, where he performed art songs by Mussourgsky, Britten, Poulenc, and Milhaud with fellow Tanglewood alumna Dr. ChoEun Lee, and a workshop of THE HALLOWEEN TREE with American Lyric Theater.

As a Filene Artist at Wolf Trap Opera, he performed Tobias Ragg in SWEENEY TODD, the title role in Gluck’s L’îILE DE MERLIN, the Major-Domo in Strauss’s ARIADNE AUF NAXOS, as well as a recital of art songs at the Phillips Collection. Other recent engagements include Marchese d’Obigny in LA TRAVIATA with the Atlanta Opera, Captain Corcoran in H.M.S. PINAFORE with Anchorage Opera, Ponchel in Kevin Puts’s SILENT TIME, and the Soldier in Stravinsky’s THE SOLDIER’S TALE at the 2018 Glimmerglass Festival.

As a studio artist at Nashville Opera, Kentucky Opera, and Des Moines Metro Opera, McDonald was heard in such roles as Yamadori in MADAMA BUTTERFLY, Pish-Tush in THE MIKADO, Harlekin in ARIADNE AUF NAXOS, Elder McLean in SUSANNAH, and the Cardinal and Priest in Philip Glass’s GALILEO GALILEI. He also performed the role of Dandini in Opera Iowa’s traveling production of LA CENERENTOLA in 2016.

With an interest in the development of new works, McDonald has performed in workshops of newly commissioned operas coproduced by the University of Cincinnati College-Conservatory of Music and Cincinnati Opera, including Scott Davenport Richards’s BLIND INJUSTICE, Gregory Spears’s FELLOW TRAVELERS,
Daniel Catán’s MEET JOHN DOE, and Terence Blanchard’s CHAMPION.

An active recitalist, McDonald has presented songs by Britten, Schubert, Ravel, Schumann, Debussy, Dessau, Mussorgsky, Eisler, and Weill. McDonald holds bachelor’s degrees in vocal performance and art history from Northwestern University, and a master’s degree in voice and opera from the University of
Cincinnati College-Conservatory of Music, where he studied with Bill McGraw.